Despite a fall in global crude prices, petrol and diesel prices were raised today for the second straight day today across top four metro cities of the country with effect from 6 am, Indian Oil Corporation (IOC) stated.  Petrol prices were raised by 6 paise in New Delhi, Kolkata, Mumbai and Chennai while diesel rates were hiked by 7 paise in the top four metro cities, according to data from IOC’s website, iocl.com. One litre of petrol was being sold in New Delhi for Rs. 76.31, in Kolkata for Rs. 79.20, in Mumbai for Rs. 83.76, and in Chennai for Rs. 79.26.

On Monday, petrol rates were hiked by 9 paise while diesel prices were raised by up to 14 paise in the four metros of the country. 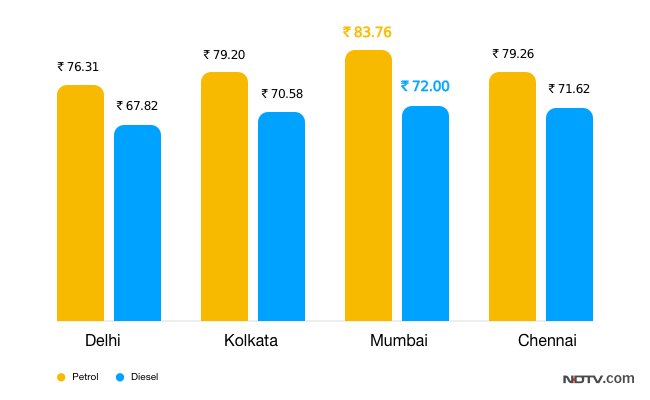 Meanwhile, global oil prices slipped after a report showed that OPEC production reached a 2018 high in the month of July, although the losses were limited as concerns about supply lingered, stated a report by news agency Reuters. September Brent crude futures fell 7 cents to $74.90 a barrel by 6:39 am or 0109 GMT after rising 68 cents, or 0.9 per cent, on Tuesday. US West Texas Intermediate crude futures (WTI) were down 6 cents at $70.08, after rising more than 2 per cent in the previous session.

Higher crude prices pushed consumer inflation to 5 per cent – above the RBI’s medium-term target of 4 per cent- in June. RBI’s three-day third bi-monthly monetary policy review meet of fiscal 2019 is underway. The outcome of the same will be revealed on Wednesday.

After raising the repo or key lending rate by 0.25 per cent last month, RBI would raise rates again in August, said 37 of 63 economists in a Reuters poll.