A couple of months back we covered a story of a Royal Enfield powered by the biggest engine to ever power an Enfield – a 1140 cc unit. The 1938 Royal Enfield KX was the largest displacement motorcycle to ever manufactured by the Indian cruiser motorcycle manufacturer. And now, Royal Enfield has unveiled a bit smaller capacity KX Design Concept at the ongoing EICMA 2018.

Royal Enfield has been teasing the motorcycle concept for a while now and pulled the wraps off the Concept KX motorcycle in Milan, Italy during the 2018 EICMA Motorcycle Show. The concept is powered by a 838 cc motor, as opposed to V-Twin 1140 cc motor of the original 1938 model on which it is based. 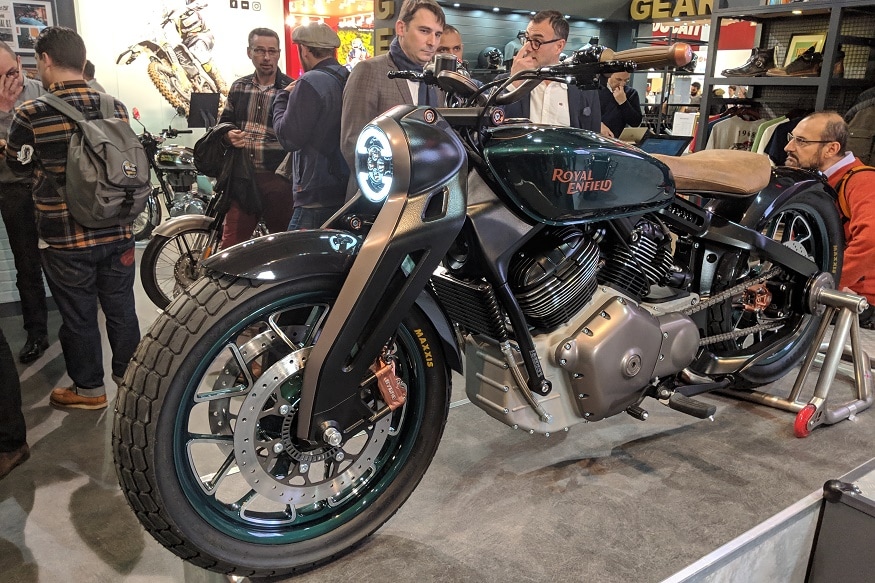 The one-off model is designed at the company’s centres in India and the UK and gets a green and copper paint scheme with black and bronze finishes to the engine and dual exhausts, while the seat and handlebar grips are wrapped in leather. The Concept has a long and low-slung design language with a retro-styled fuel tank.

Apart from the design, everything else is modern including the blade-style girder fork design, LED headlamp that incorporate a stylised version of the old Redditch ‘E’ for Enfield logo. There is a single-seat unit of a cantilever design and the bike rides on the massive 19-inch wheels, while the seat height is low at 740 mm.

The concept is an indication that Royal Enfield can continue its expansion spree with the modern classics like the Concept KX. They have already revealed the bugger capacity 650 Twins.